Jumping 63%, the ABC’s coverage of the Melbourne International Comedy Festival Gala had 429,000 tune in, while Annabel Crabb’s Tomorrow Tonight lifted 22% for 463,000. 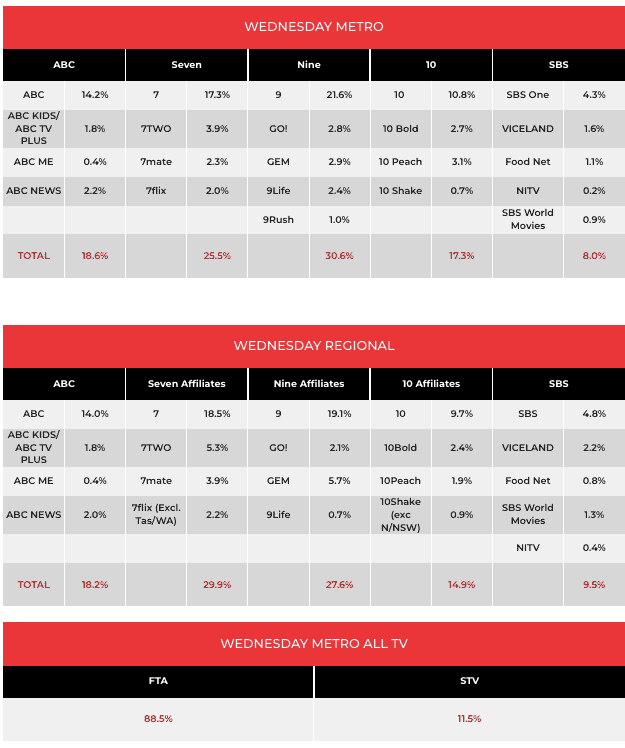 On A Current Affair, 650,000 watched as the show investigated a self-proclaimed Shaman and answered questions about the flu jab ahead of winter. Then on Travel Guides, the guides continued their USA road trip heading into the deep south to visit Louisiana. 727,000 tuned in, making it the top non-news program of the night.

On Seven, Home and Away was watched by 499,000 before Double Fault: The Novak Djokovic Saga gave 298,000 viewers a behind-the-scenes look at the immigration saga surrounding Djokovic’s attempts to enter Australia to compete in the Australian Open.

The Front Bar had 278,000 watch as the team tackled their most South Australian show ever.

On 10, The Project had interviewed Michael Towke following his accusations of racism against Prime Minister Scott Morrison, and spoke to the Harlem Globetrotters. Afterward, the channel aired back-to-back episodes of Ambulance Australia, with the first episode drawing a crowd of 324,000, and 317,000 for the second episode.

On the ABC, 556,000 tuned in to 7:30 before the Wednesday night comedy lineup kicked in. 569,000 watched Tom Gleeson give away the big brass mug on Hard Quiz, with 510,000 sticking around to see Shaun Micallef get Mad As Hell. Tom Gleeson was back on the screen at 9pm as one of the guests in the second episode of Tomorrow Tonight, which asked 335,000 viewers what they’d do if Australia brought in a social credit system.

On SBS, the top non-news program was Tony Robinson’s Coast to Coast with 147,000 tuning in. 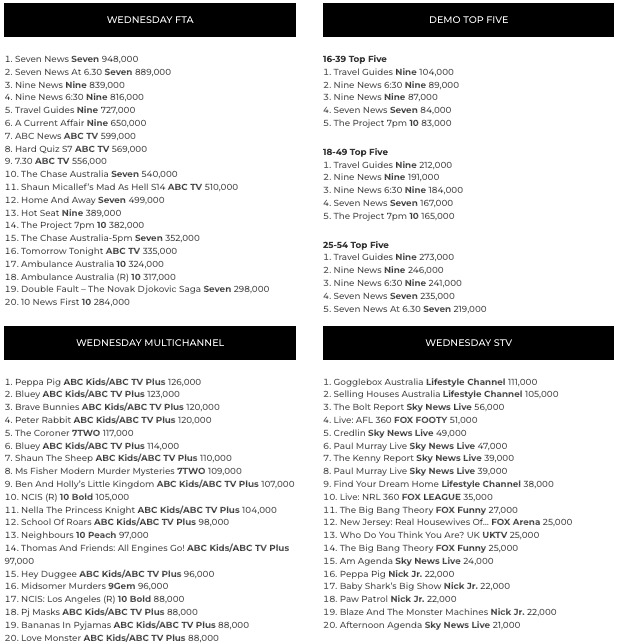